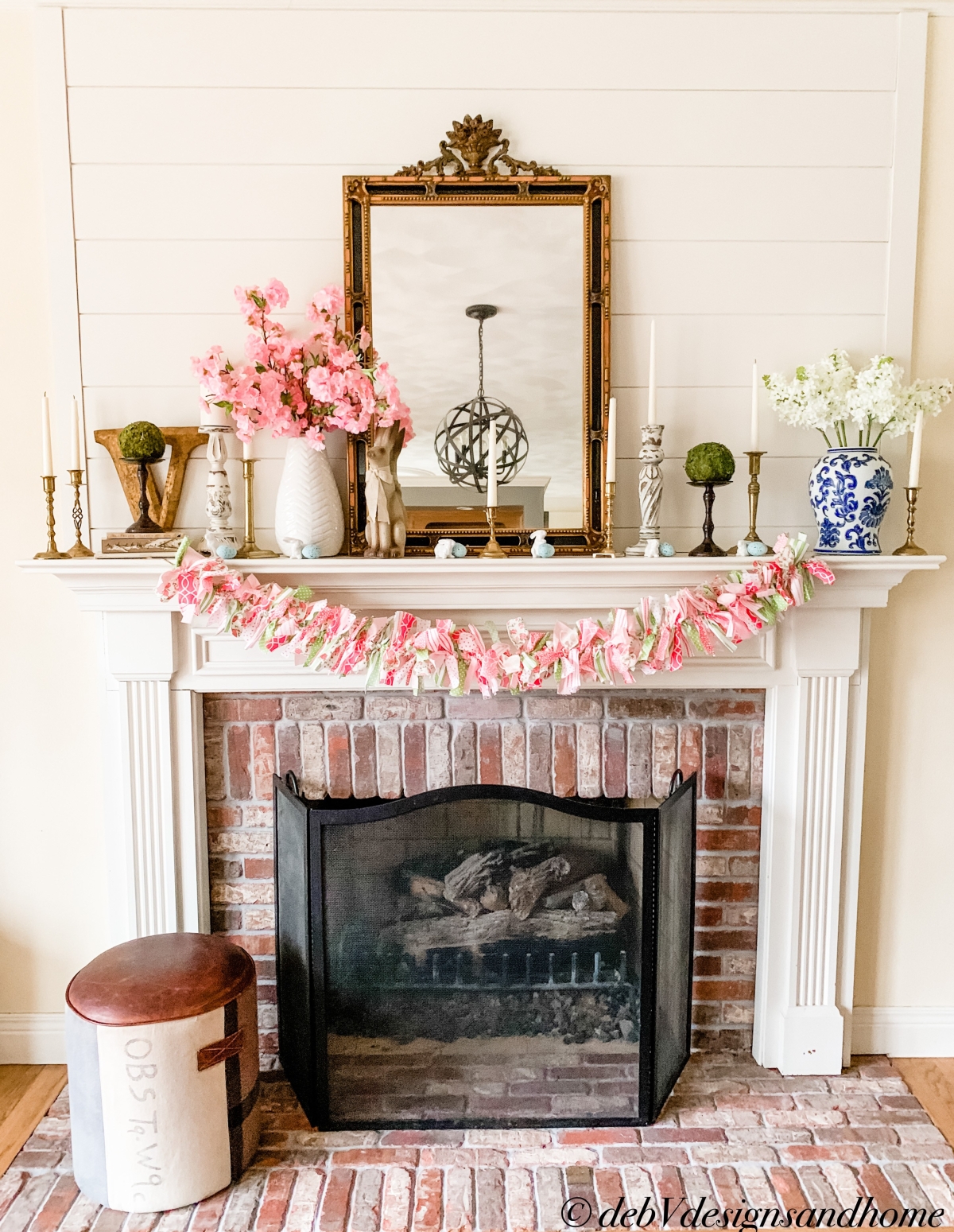 Currently we are all stuck at home and that means even with work, we have a lot of time on our hands.  I happened to be in the Walmart fabric isle back in early February when I was shopping for fabric to make a Valentine’s Day table runner.  I was lucky that they had out all of their Spring fabric squares.  I saw the green and pink swatches and was totally smitten. Green and pink is always a beautiful and bright combination, so I grabbed up a few different patterns and prints.  I also found this lovely rose covered ribbon in the same shade and it was on sale.

I began by cutting each swatch of fabric in half and then cut each piece into strips. Although most of them were almost the same size,  I did not trim them right away to be equal.  I would rather have them a little too long than too short.

I took my jute string, and measured the length that I wanted for my mantle.  So your length will vary depending on where you are going to put it.

After I cut all of my fabric strips and ribbon strips, I loosely decided on how to organize my color pattern.  I began to tie the pieces of fabric tightly around the jute string. After each tie, I made sure that I slid it snugly up against the  previous ribbon so that there was no space.

The process definitely takes time, but it is very easy.  My daughter Emma and I sat and binge-watched Grey’s Anatomy as we tied our strips. When we felt like we had enough fullness and length, we then double checked our length by holding it up to the mantle.  We then tied a small knot at each end so that the fabric ties would not slide.

I then took the entire garland and laid it out on my counter.  I went down the length of the garland and trimmed the edges so that they were relatively even, and snipped loose strings.

This was such a fun and easy DIY project and one I could do with my daughter.  After completing it and hanging it up, I realized that this color palette would be darling for a baby shower or nursery as well.  You can create countless other garlands for varying events depending on the fabric you choose. I already have swatches so I can create one for the next Christmas season.

Hopefully you have some craft supplies around, or old fabric that you are not using.  It’s a great project to pass the time.  Cheers to being home and making the best of it.  Here are a few shots of the finished mantle.

I hope you give it a try, and holler with any questions!  xoxo Deb (Product sources listed below where available.)